This blog was co-written with Idan Revivo, head of Aqua's cyber research team

Container images are a growing path for external code to enter an organization. Docker has simplified image workflow in order to encourage adoption by developers, so anyone can pull and run images that were built and pushed to Docker Hub, often by unknown individuals. This is being exploited by malicious actors to embed sophisticated malware in innocent-looking images.

Application dependencies within container images are often based on open source packages that can be exploited by a dishonest contributor, who’s gained a sufficient level of trust and was able to push malicious code into an open-source project. While mature projects such as the official Linux distributions have well-defined review processes, smaller projects lack the resources to effectively review code from trusted contributors and have weak governance.

Currently, there's no practical method to verify what a container image will do when activated, short of actually running it, which is very risky without properly isolating it from the internal network. Organizations are putting themselves at risk by blindly running container images from public sources inside their environments.

This risk isn’t theoretical. Aqua’s cyber research team has uncovered and blogged about escalating attempts to hide malware inside container images, in a way that evades static malware scanning and only comes to life when the container is instantiated – often using several stages.

Once an image scan is initiated from either a registry or a CI/CD pipeline, Aqua DTA runs and analyzes the image for several minutes and displays the analysis results, determining the potential risk level that the image presents if allowed to run in an open, networked environment.

When Should Aqua DTA be Used?

In addition to static scanning of images for malware, vulnerabilities, and other issues, we recommend using Aqua DTA to address the following use cases:

Scanning the image with Aqua DTA revealed solid proof of malicious behavior during runtime that provided insight into the exact mechanisms employed by malicious actors:

A few months ago, two malicious python packages that leveraged a type of squatting attack to steal SSH and PGP keys were discovered, after being available for download for a year. Our cyber research team ran a container that included the jellyfish package and then scanned it with Aqua DTA. It successfully identified the image as malicious with the following behaviors:

The Known is Not Enough

The software supply chain for containers, with its extensive use of open source packages and images from different sources, makes it challenging to know and control the exact payload of each container image. The increasingly sophisticated attacks we have witnessed require addressing this risk, which static malware scanners cannot address. Aqua Dynamic Threat Analysis assesses the hidden risks from container images before they run in production environments. It complements image vulnerability and static malware scanning, reducing the risk of attacks on containerized applications and providing additional controls to secure the software supply chain, in a highly automated fashion.

Aqua DTA is offered as an extension to Aqua Security’s Cloud Native Security Platform (CSP) to scan images from various CI tools and container registries, and is available in preview in Aqua CSPM. 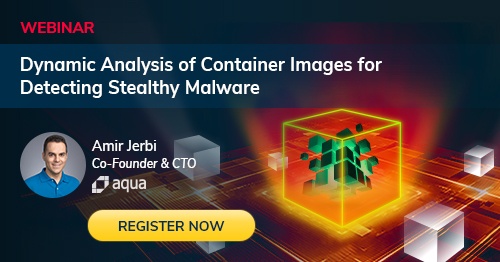 Amit is a product manager at Aqua. As part of the Aqua product team, his work focuses on Kubernetes and container security in the Cloud Native ecosystem. When he isn't at work, he enjoys writing music and playing in a rock-blues band as a guitar player.