The new Trivy release is out! As ever, there are tons of exciting updates and features, such as role-based access control (RBAC) and Helm chart scanning, support for custom extensions, a Trivy Operator Lens integration, and many more. Read on for feature highlights and try them out.

RBAC scanning has been a long-requested feature, and now it’s available in Trivy v0.29.0.

RBAC allows us to define user privileges and access rights such as who is allowed to access, use, modify, or delete a resource. For this, RBAC uses Kubernetes Roles and ClusterRoles. However, it can be hard to keep track of all the service accounts in your cluster and their respective access rights.

With Trivy RBAC, you can get a simple overview of the accounts and their respective privileges:

Vulnerability scanners with software composition analysis (SCA) assume that the existence of a package with a vulnerable version indicates that your application is vulnerable. However, in many cases, a vulnerability might not actually affect your application, depending on the runtime version you’re using, middleware configuration, or complex conditions. As a result, many vulnerability scanners can show a lot of false positives.

For example, an application with the Spring4Shell vulnerability (CVE-2022-22965) wouldn’t be affected with JAR packaging and an old Java 8 version, even though it uses a vulnerable version of Spring Framework.

In the following example, a module for Spring4Shell detects the Tomcat and Java versions in addition to the version of Spring Framework. Then, the module decreases the severity because the vulnerability conditions aren’t met and this image isn’t affected by this vulnerability.

GitHub just released GitHub snapshots, and Trivy already integrates with it. The GitHub snapshot model highlights all dependencies of a repository. You might already be familiar with Dependabot, a GitHub feature that enables automatic updates to repository dependencies.

With GitHub Snapshots and Trivy, you can automatically update dependencies based on the vulnerabilities discovered by Trivy. Learn more about it in the GitHub documentation.

As you might already know, Trivy can scan infrastructure as code and other configuration files for misconfiguration issues. Helm is a popular Kubernetes packaging and templating tool that helps deploy Kubernetes manifests defined in Helm charts to a Kubernetes cluster.

With the newest Trivy release, you can now scan any Helm chart directly for misconfiguration issues before deploying those resources to your Kubernetes cluster.

Once you run the Trivy config command, the Helm charts are rendered into Kubernetes manifest files. The manifests can then be scanned for configuration issues. 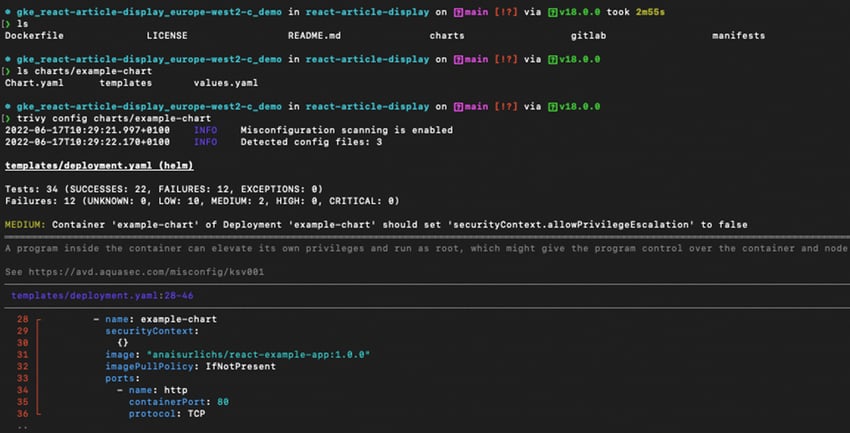 To access vulnerability reports and other security scans, you need to query your cluster for the specific resource. The output is generally displayed as custom resource definitions (CRDs), which provide detailed information of the scan.

Lens is a popular integrated development environment (IDE) for Kubernetes, which many developers use to manage their Kubernetes clusters in a simple graphical user interface. Lens can be extended to show additional Kubernetes-related information right in the app.

We’ve now released the Trivy Operator extension for Lens. Once you’ve installed the integration into your Lens client, you can:

For more details and installation, go to the Trivy Lens GitHub repository.

We’d like to thank the amazing member of our community Isla Nublar Security, who contributed a lot to this extension. 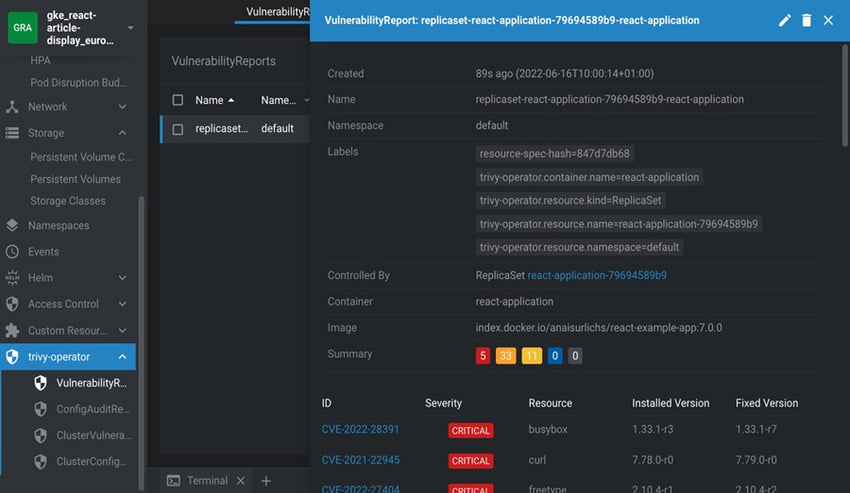 Trivy Operator security scans highlighted in Lens through the extension

But that’s not all. Here are more cool updates

We have lots of exciting plans for Trivy. Become part of the journey by joining our Slack community and contributing on GitHub. Also, let us know if you have questions or if there are other features you’d like to see in Trivy.

And when you try the new Trivy features, share it on social media! 🙌

Anaïs is a Developer Advocate at Aqua Security, where she contributes to Aqua’s cloud native open source projects. When she is not advocating DevOps best practices, she runs her own YouTube Channel centered around cloud native technologies. Before joining Aqua, Anais worked as SRE at Civo, a cloud native service provider, where she helped advance the infrastructure for hundreds of tenant clusters. As CNCF ambassador, her passion lies in making tools and platforms more accessible to developers and community members.