Aqua Nautilus discovered new Go based malware that targets Redis servers. The attack was executed against one of our deliberately vulnerable Redis honeypots (CVE-2022-0543). Our investigation revealed new undetected malware written in Golang designed to target Redis servers to allow the attacking server to dominate the compromised machine. Therefore, the malware received the name Redigo. In this blog, we’ll examine how adversaries exploit this Redis vulnerability and use it to run the new malware. Moreover, we’ll review the attack process and recommend methods to protect against future attacks.

Redis (remote dictionary server) is an open source in-memory database and cache. It was first released in 2009 as a solution for real-time applications that needed a way to deliver data to their clients faster than a relational database could handle. It allows data fetching and delivery in short response time, allowing millions of requests per seconds. Redis assures responsiveness by using a cache to store frequently accessed data in memory.

Redis architecture contains two main processes – Redis client and Redis server. The Redis server constitutes the main part in the architecture. It is responsible for storing data in memory and handles management processes. The server also consists of Lua scripting engine which allows users to upload and execute Lua scripts directly on the server. This ability makes the process very efficient to read and write data from scripts. The engine should be sandboxed so that the interaction with the Redis client will be made using Redis APIs while limiting the client abilities to run arbitrary code on the Redis running machine. However, in 2022 a vulnerability was discovered in the Lua scripting engine. In some Debian packages the Lua library provided a dynamic library. When the Redis server loads the Lua library, it loads a package variable. The package is left in the Lua sandbox and used to call any Lua library. That resulted in a Lua sandbox escape that would allow an attacker to execute arbitrary commands. 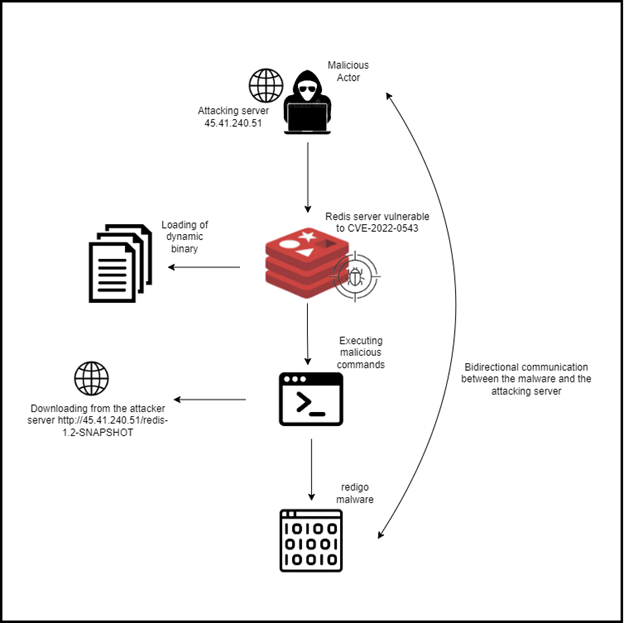 Figure 2: captured communication of Redis commands between the vulnerable Redis server and the attacking server

The library file exp_lin.so that is loaded by the adversaries executes the code which exploits the vulnerability that was deliberately left in our honeypot. This file contains the implementation of the command system.exec which allows the adversaries to execute an arbitrary command and initiate their attack. The first use of the command is activated to receive information about the CPU architecture. The second use of the command is done to download the newly discovered malware from the attacking server - Redigo. After downloading the malware file, the attackers elevate the permissions of the file to execute, and execute it (for malware investigation read below).

The adversaries are interested in concealing their activity to avoid being detected. They are doing this by using a seemingly legitimate communication of Redis that simulates communication between Redis cluster using port 6379. However, the communication is being used by the adversaries to transfer commands that will allow them to control the vulnerable server.

Adversaries strive to get familiar and learn about the system they have attacked, in this case, our Redis server. This information is valuable to them as they progress with their attack. As we described earlier in the initial access, the adversaries were using the Redis command INFO, which returned information and statistics about our server. Our server returned a response with all the specified information including details about the server, memory, and CPU. This data helps adversaries learn about the target resources. Moreover, after exploiting the vulnerability and escaping from the Lua sandbox, they run the lscpu command on the host to receive information about the CPU.

We limit the attack duration in our honeypots, and, thus, it is hard to say if we’ve seen the full scope of the impact. Based on similar attacks, we can speculate that when attackers add a targeted host to a large botnet it usually means that the compromised server will take part in a Distributed Denial of Service (DDoS) campaign against target applications and affect their business. Another plausible scenario is to run cryptominers on the targeted host. Furthermore, since this is a database, attackers can exploit the host to steal data or secrets and gain further foothold in the environment. In any case, each scenario can make an impact on the resources of the compromised server which is now used as part of a co-opted system to solve resource intensive problems that may impact its availability to the users who daily use its services.

Our investigation of this malware examined two angles – network analysis and malware analysis. The Redigo malware was downloaded from the same server that started the attack on our Redis container. Searching for the IP address in the Shodan engine reveled the server had an open port of Redis – 6379.

Figure 4: details of the attacking server in Shodan 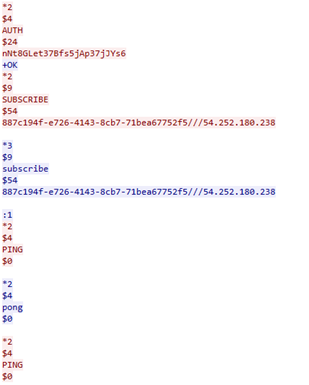 Figure 5: conversation between the vulnerable Redis and the attacking server

The lines that colored in red represent outbound communication generated by our server while the lines colored in blue represent inbound communication generated by the attacking server. In one of the commands, we can see that the vulnerable Redis server tries to authenticate the current connection using the AUTH command. Further, there are PING-PONG commands – the vulnerable Redis sends a PING command and the attacking server returns a PONG. This is useful when testing whether the connection is still alive.

Deeper investigation of the malware revealed that the file was written in go and included some interesting functions that exposed its real intentions: 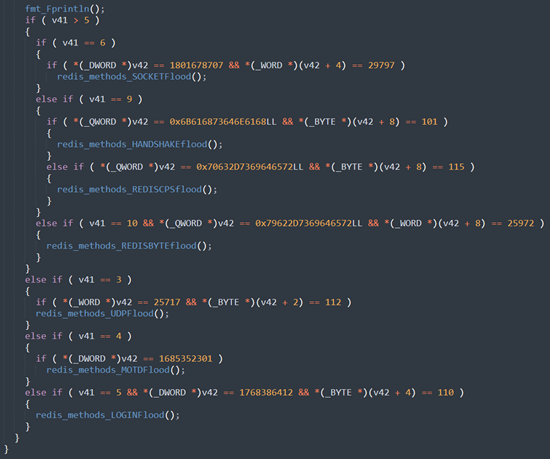 The functions above demonstrate different implementations of commands that the malware uses to dominate its servers (the attacked Redis servers). We can see that some of the functions are written to the Redis server in particular which may imply that the adversaries desired to build an adjusted attack that would target Redis servers.

Because Redigo is a new Redis backdoor malware it remains undetected in Virus Total by all vendors:

As can be seen in the screenshot below from our eBPF-based Aqua Lightning Enforcer, the first event alert was a detection of a shared object loading and deleting. Normally, we shouldn’t see these kinds of events in running Redis servers. This is the .so file (exp_lin.so) that was passed via the Redis communications. Next, we see a new executable drop. This is the binary file redis-1.2-SNAPSHOT, which is the Redigo malware. 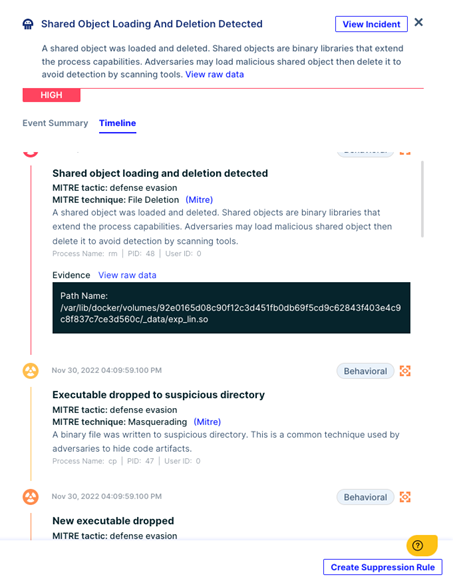 Next, we see a second payload and events of outbound traffic (socket_create and socket_connect).

Above you can see the how these events look like when using Aqua Tracee, Aqua’s open source runtime security and forensics tool for Linux.

This led us to further investigate the binary and to reach the conclusion that it was designed to disguise command and control communication as legitimate Redis communication.

This novel malware provides a great example showing the full scope of Aqua's new Lightning Enforcer and runtime protection solution. In this case, we observed novel malware dropped during runtime on our server. As can be seen in the Virus Total scan, conventional tools such as anti-virus didn’t mark this tool as malicious. While our Lightning Enforcer based on eBPF technology was able to detect this behavioral anomaly and alert us about malicious activity. Normally, an .so file shouldn’t be loaded in runtime. Additionally, we shouldn’t see files dropped in runtime in container environments.

We are standing before a new threat, backdoor malware first seen in the wild. These adversaries were using  seemingly innocuous communication with the Redis protocol while building a botnet network and then converted our Redis server into a slave to execute the master’s commands. The attack was successful thanks to the vulnerability these adversaries exploited in our server.

To cope with these types of threats, we recommend following these guidelines: