We at Aqua Nautilus have discovered that npm’s API allows threat actors to execute a timing attack that can detect whether private packages exist on the package manager. By creating a list of possible package names, threat actors can detect organizations’ scoped private packages and then masquerade public packages, tricking employees and users into downloading them. This kind of attack is linked to a broader category of supply chain attacks. Over the past few years, we’ve seen an increase in the volume and variety of such attacks in the wild. In this blog we’ll dig deeper into this issue and demonstrate how you can mitigate the risks.

Our research has shown that by using a timing attack a threat actor can detect the existence of private packages via npm’s API.

For instance, when an unauthenticated user is sending to the npm’s API a GET request (https://registry.npmjs.org/@<scope_name>/<secret_package_name>) to receive information about a private (scoped) package, the response is that this package isn’t found (http 404 response), whether the package ever existed or not. In the screenshot below, you can see how we sent a request and received a “404 Not found” response (marked in red).

Our example shows how we can request API information about secret-packages,
which is a private package under the random-organization scope using Postman.
This request returned 404-Not found as the request came from an unauthenticated and unauthorized user. Additionally, we can see that the server responded after 686 milliseconds.

If a threat actor sends around five consecutive requests for information about a private package then analyzes the time taken for npm to reply, it is possible for them to determine whether the private package in fact exists. More accurately, this would show whether the package exists now or if it had existed in the past though is now deleted. In both cases, it would be the same result.

Due to this, we can assume that this flaw is embedded in the architecture of the API and is a result of the caching mechanism. To validate that this flaw exists, we conducted the following steps:

As seen in the screenshot below, we created a private npm package and uploaded it. 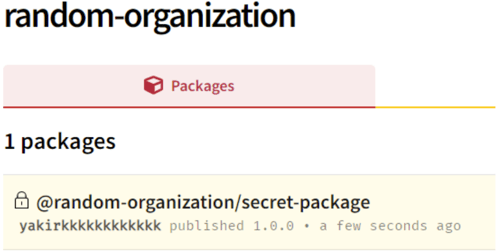 Threat actors often seek various ways to penetrate your organization. Over the past few years, we’ve seen a dramatic increase by hundreds of percentage points in supply chain attacks.

In some cases, the threat actors’ goal is to gain access to open-source packages/projects and poison them.

Other times they masquerade as private or public packages/projects, deliberately misspelling their names in order to trick unsuspecting victims into downloading their malicious package instead of legitimate popular ones (i.e., installing the Python package 'Padnas' instead of 'Pandas').

When this occurs, it’s not surprising that these incidents get wide coverage in the media. For instance, Bleeping Computer recently published a story about a supply chain attack in npm that impacted hundreds of websites and apps. In another report, they explained the risks of private package names exposure on npm.

How attackers can merge everything to an attack

A Scoped Confusion attack usually starts with a threat actor who collects intelligence about a specific organization:

With this in mind, we thought about a few methods that could be used to create a possible package names list:

Now that the attacker has a potential list of scoped private packages, a timing attack could be generated. Threat actors might tweak the algorithm to make minor modifications in their package names list in order to increase the chance of discovering an existing package.

Once the timing attack has finished running, the threat actors would analyze the results, retaining the packages with higher average response times – meaning that the private packages do exist.

Now that the threat actors have created a list of possible private scoped packages, they need to check that there are no public packages (package without a scoped) on npm with the same names, meaning they can create malicious package under the public scope of npm.

Note that we don’t encourage cybercrime. We merely describe here ways in which threat actors build their supply chain attacks.

In this blog we’ve explained how we discovered a flaw in npm’s API which is disclosing information about organizations' private packages. Threat actors have the capability to create a list of potential private package names and run timing attacks to verify their existence. Later, threat actors could create public packages masquerading as legitimate private ones and trick unknowing developers into downloading malicious packages.

We have disclosed this information to GitHub which, in response, replied that this architecture of the API is by design.

"Architectural nuances prevent us from systematically preventing timing attacks from determining whether a specific package exists.”

Here are some steps you can take to mitigate these risks:

The timeline of the discovery:

Yakir is a Security Researcher at Aqua Nautilus, Aqua’s research team. He focuses on finding and researching new vulnerabilities and attack vectors in cloud native environments. Prior to Aqua, he worked as a red teamer. When he is not at work, he enjoys baking and cooking and is particularly interested in the science of cooking.