Threat Alert: New Malware in the Cloud By TeamTNT

Over the past week we observed three different attacks on our honeypots. The scripts and malware that were used bear a striking resemblance to none other than the threat actor TeamTNT. Eleven months ago they posted a farewell note on Twitter. Since then, we have only seen legacy attacks which automatically run on past infrastructure. Could it be that TeamTNT is back with new tricks? In this blog we analyze these attacks and their possible connection to TeamTNT.

A Brief History of TeamTNT

Since that first attack, this threat actor was highly productive and innovative, introducing new techniques against cloud environments that hadn’t been seen before. There had been many reports over the years about the threat actor’s campaigns and toolbox.

On November 6th, 2021, TeamTNT communicated via Twitter a farewell note. In reality, their infrastructure continued to automatically infect new victims with old malware as their tools included various worms that could scan and infect new targets. Once a target is acquired, a new scan and infection sequence begins. Thus, as of today, their old campaigns continues working. Still, over the past eleven months we haven’t seen any new campaigns or tools coming from TeamTNT. This has led the entire community to assume that TeamTNT had indeed stopped their activity. 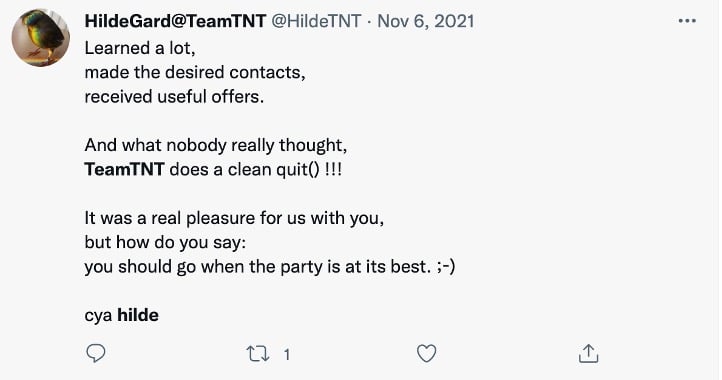 But, are they back?

In the first week of September, our honeypots identified at least three different attacks bearing various signatures and tools which are associated with TeamTNT. Based on these, we are quite certain that this vibrant threat actor has renewed its malicious activity.

With these new attacks, should we expect further innovation and cunning from TeamTNT?

By far, this may be their simplest and most dramatic attack. What we discovered is that TeamTNT has been scanning for a misconfigured Docker Daemon and deploying alpine, a vanilla container image, with a command line to download a shell script (k.sh) to a C2 server (domain: whatwill[.]be on IP 93[.]95[.]229[.]203).

The file k.sh that was dropped and executed on the attacked server

The shell script is cloning a GitHub project from what seems to be a TeamTNT account. The project was a bit of a conundrum at first, specifying that this is a fork of “Pollard's kangaroo for SECPK1”. We consulted  Jonathan S., a cryptographic expert, to better understand this technique. Additionally, we conducted further research to shed light on what we observed. We tracked this topic within a Bitcoin talk forum as well as several academic papers, “A New Method for Solving the Elliptic Curve Discrete Logarithm Problem”, “How Would Quantum Computing Impact the Security of Bitcoin by Enhancing Our Ability to Solve the Elliptic Curve Discrete Logarithm Problem?” and the best explanation about Pollard’s Kangaroo for WIF solving. In addition, we consulted with a cryptographic expert to better understand this topic.

Since these articles are a challenging read, we‘ve worked here to summarize them for you to highlight the most essential information. The Elliptic Curve Discrete Logarithm Problem (ECDLP) is considered an irreversible function. It is the foundation for secure cryptography in private and public keys encryption which is the bedrock of secure internet communication (SSH, SSL etc).

The Pollard’s Kangaroo interval ECDLP solver algorithm appears to be an attempt to break the SECP256K1 encryption which is used by Bitcoin to implement its public key cryptography. This is interesting because TeamTNT is using the high (and free or illegal) computational power of their targets to run the ECDLP solver. It is designed to run in a distributed fashion since the algorithm breaks the key into chunks and distributes them to various nodes (attacked servers), collecting the results which are then written locally to a text file.

Breaking the cryptographic encryption is considered “Mission: Impossible”. If you actually succeed doing that, you potentially have the keys to almost everything that is connected online, which could have a devastating effect on the entire internet.

This name had been used in the past by TeamTNT in previous attacks and, thus, thought to have been associated with an old attack. However, it turns out that this script is novel, pointing to new C2 servers (on 93[.]95[.]229[.]203 and 205[.]185[.]118[.]246). In this attack, though, we see all the old tricks TeamTNT has used over the years including rootkits to hide their activity, cron jobs to gain persistence, cryptominers to hijack resources, ssh and keys theft to conduct lateral movement in the local and external network, and many other techniques seen in the past.

c.sh shell file:
This script seems to be designed to deploy a cryptomining attack on vulnerable and misconfigured Redis services and contains the following snippets:

The file c.sh is designed to detect and attack exposed Redis server. In the past, TeamTNT
massively attacked Redis servers to mine cryptocurrency. Read more about it here

The “What Will Be” Attack

This is the third attack by TeamTNT that that we observed this week on our honeypots. Initially, the threat actor exploited a misconfigured Docker API to run the vanilla container image alpine with a malicious command that was designed to download and run the shell file dc.sh. 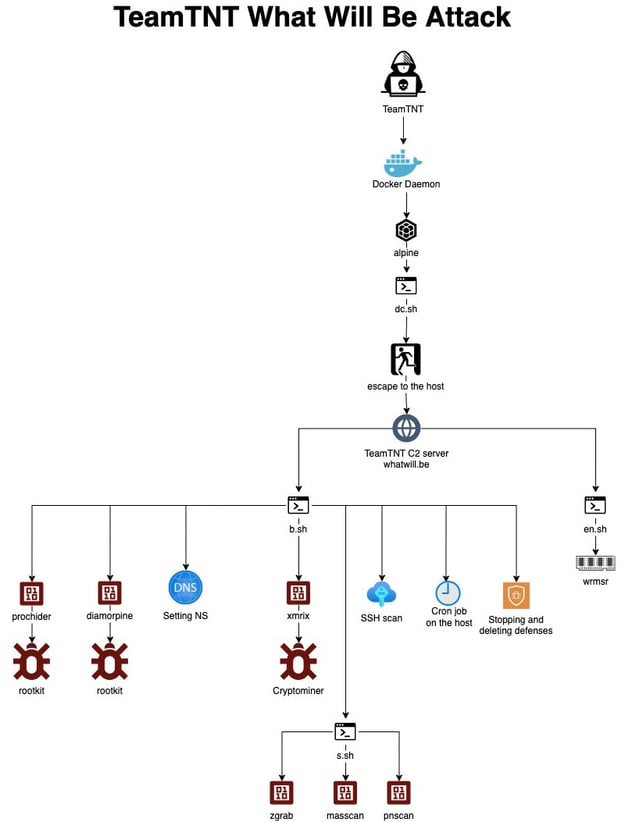 dc.sh shell file:
This file contains two very interesting functions designed to exploit the release_agent vulnerability in order to escape to the host from the container. You can further read about it here iin a previous blog from our team.

As can be seen in the two screenshots below, in both functions the threat actor is downloading and running further shell scripts.

The first function from the shell file dc.sh

The second function from the shell file dc.sh

Apparently, TeamTNT has added some new tricks since this technique did not appear to be used in the past by the group. 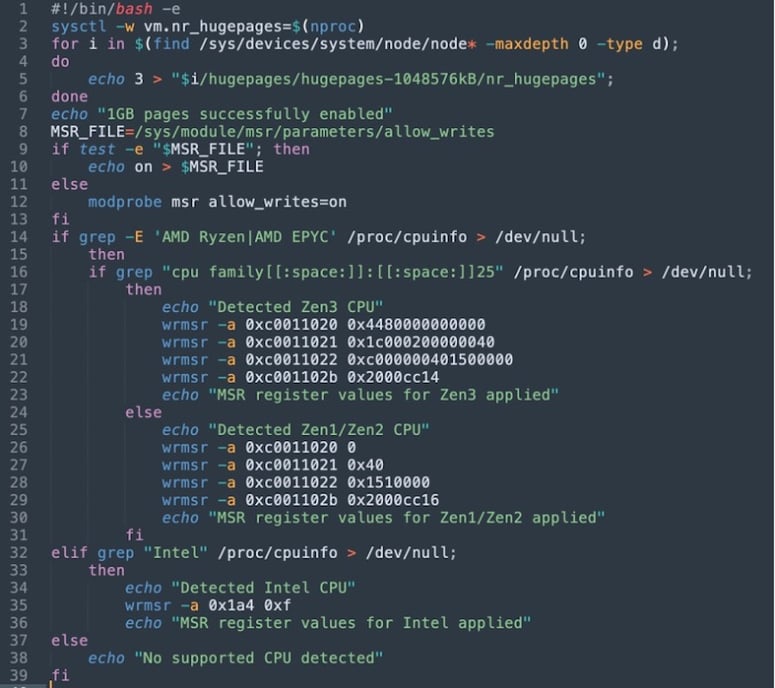 In the first function (dock1) d.sh is downloaded and run. It is identical to the one used in the cronb attack described above. We could see that a download and execution of a “syslog” binary from the C2 server is commented out. That binary is available for download from the C2 server and is actually a Tsunami malware (MD5: 1ded4ed94ab31f1a3bba3a50cfa7238f, 32 detections in VT), commonly used in the past by TeamTNT. It could be that their infrastructure is not fully online and thus it wasn’t used in this attack.

In the second function (dock2), there are two comments that are supposed to open a backdoor. This technique is also new since it wasn’t seen by the group in the past. Additionally, Tsunami malware (syslog) and ent.sh shell file (en.sh renamed) downloads are kept as a comment as well.

In the Kangaroo attack analyzed above, we mentioned that the GitHub account used to host the repository of the Kangaroo project is most likely utilized by TeamTNT. The name of the account is ‘wafferz’ which means armory in German. In the past, there were many indications in TeamTNT’s code, repositories, websites, servers, and Twitter account that have a German origin. In this attack it is no different. In the code, their “sense of humor" is apparent in the comments and prints to logs.

In the project Dock in the GitHub account, you can see a further link to TeamTNT since most of the code is strikingly similar to the attacks described here. The shell script scan.sh is particularly interesting and designed to search for misconfigured Docker environments and deploy malware. In a comment we found a link to the main server TeamTNT used in the past, teamtnt[.]red. It looks like the server is offline.

Interestingly this account also contains the fork of an argo workflows project. Could it be that TeamTNT is planning something in the future to exploit this application?

TeamTNT was highly active between 2020 and 2021. They had used many tools and techniques in their campaigns and had launched them frequently. Some of these tools had been designed to escape from container environments, steal tokens and credentials, scan and attack local and external networks, hide activities with rootkits, and more.

Now TeamTNT appears to be back with new tricks. We are still assessing if these three attacks are a sign that they have resumed their campaigns against cloud native environments or not.

Regardless of the question if TeamTNT is back or not, we strongly encourage organizations to empower their security teams with Cloud Native Application Protection Platform (CNAPP) solutions that cover various stages of the cloud development pipeline and enable greater visibility and context.