Running applications usually interact with the operating system via system calls (syscalls). For this reason, security practitioners commonly analyze the behavior of the running application via syscalls. It is important to carefully choose the method for collecting syscalls, because there might be a gap between the argument values that are captured and what is actually being used by the operating system.

Using eBPF allows the running of sandboxed programs in the Linux kernel without changing the kernel source code or loading kernel modules (you can learn more about eBPF and its advantages in this blog post). By attaching such programs to Linux Security Module (LSM) hooks using kprobes, we can collect the argument values that were actually used by the kernel. Below are some examples of issues we overcame with LSM hooks:

In Linux, when reading information from a user program, the path argument can contain a relative path.
For instance, when invoking a program, Tracee can pick up a syscall with the following arguments:

The path in these syscalls may refer to the same location, but the problem is that, based on the given arguments, it is difficult to precisely locate the canonical path that is absolute and always unique. LSM hooks, however, allow Tracee to fetch the canonical path from the root of these files. The significance of canonical paths becomes even more clear when building a security policy because a relative path could be too ambiguous as to the intent and effect. Tracee LSM hooks events allow you to rely on a canonical path and easily apply clear, effective security policies.

Argument values that were given by a user program and might reference a file, for example, can sometimes contain links to other files. In Linux, we can create a symbolic link to a file in a manner that one file serves as a reference to another file or directory. The operating system will use the symbolic link to reach the linked file and apply the given command. Here’s an example where we created a file with a benign name python and linked it to a malicious binary my_malware:

When executing python, we can see that two events are tracked by Tracee. The first event is a syscall with the argument value ./python. But in reality python is symbolically linked to ~/bin/my_malware, and thankfully the security_bprm_check event captured by Tracee returns a pathname to the file that was actually executed.

For instance, when invoking a program, Tracee can pick up a syscall with the following arguments:
execve("/bin/ls", NULL, 0) 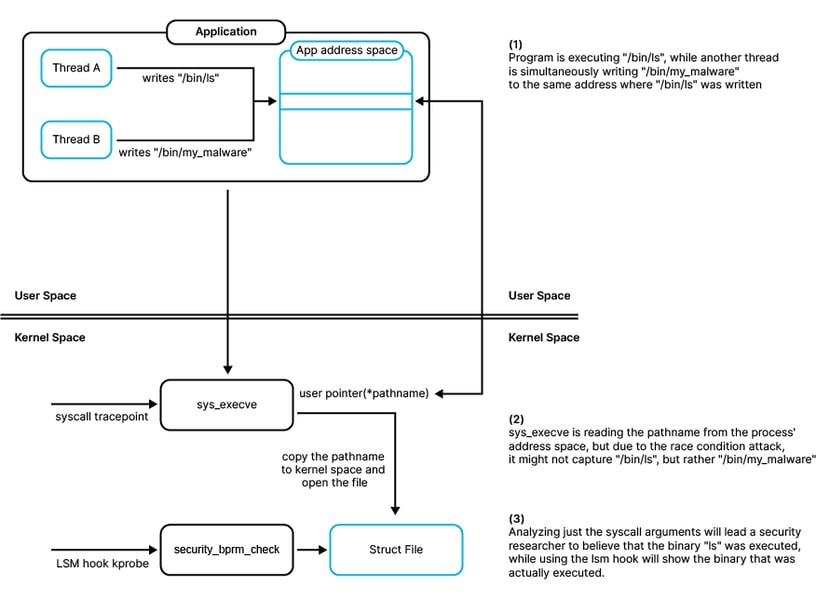 Continuing our example, the other thread can change the first argument from /bin/ls to /bin/malicious, the latter will be executed by the kernel, while the former will be recorded by Tracee. This scenario is widely known and well-documented as TOCTOU race condition. Attackers can exploit it to influence the recorded value between the check and the use. This may lead to inaccurate data collection and mislead security researchers or automated detection tools that rely on Tracee’s data.

This is the primary reason why we decided to use LSM hooks in Tracee along with the syscall data. Events such as security_file_open contain the pathname that was actually used by the kernel and is cross-referenced with the reported regular syscall event.

Tracee is an easy-to-use Linux runtime security and forensics tool. It is powered by eBPF technology to better understand the runtime behavior of a program and overcome problems that may be challenging to similar security software.

As a best practice, whenever we use Tracee in our products as a runtime security and forensics tool, we complement it with LSM hooks, and recommend that all Tracee users do so as well. Naturally, there are some syscalls where LSM hooks are not available, but so far the following LSM hooks are covered:

If you are already a Tracee fan, keep an eye on changes and new features on the project's GitHub page.

Yaniv is a Security Researcher at Aqua Security. He specializes in low-level Linux instrumentation technologies to perform dynamic analysis on Linux containers and systems. He is currently completing his Master's thesis in cyber security at BGU on detecting Android malware with eBPF technology. While not in front of a computer screen, he likes watching Sci-Fi movies and playing with his kids.