Knative is the newest member of serverless environments that is gaining significant interest and generating a great deal of hype in the Kubernetes/Cloud Native community. It’s an open source framework that was designed to enable the development and deployment of container-based serverless applications that are easy to transport between cloud providers.

The GA version of Knative was released in July 2018, supported by Google, Pivotal, IBM, and SAP. It targets enterprises who are interested in deploying serverless functions on internal Kubernetes clusters. This avoids cloud vendor lock-in and specificity, which many perceive as the largest drawback of current serverless environments such as AWS Lambda, Azure Functions, or Google Cloud Functions.

The Knative framework consists of the following components:

The following diagram illustrates a Knative implementation in a container ecosystem: 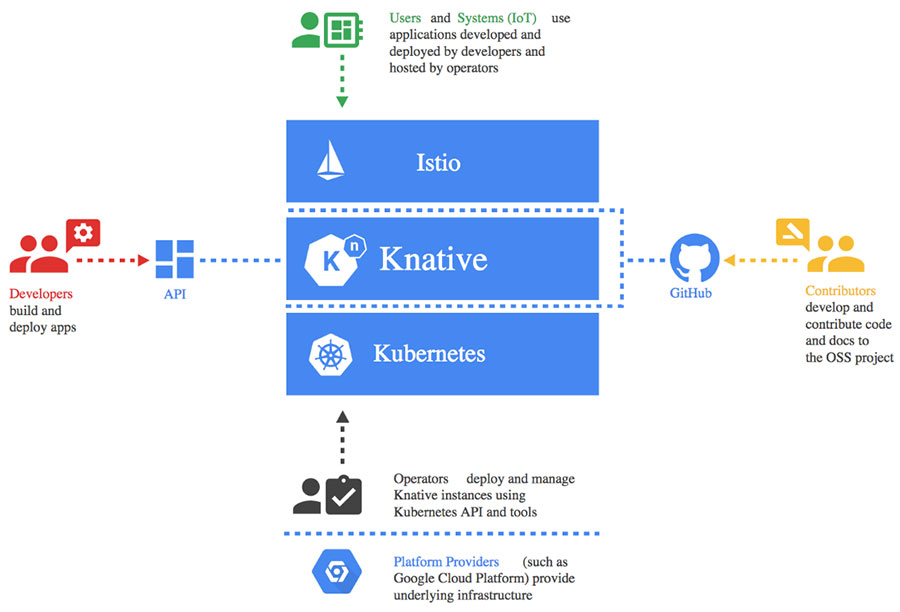 Serverless Experience in a Containerized Environment: Knative creates serverless environments using containers, providing you with the benefit of event-based architecture on-premises without the restrictions and limitations imposed by public cloud services. Knative automates the container build process, enables the autoscaling mechanism that scales up and down, providing capacity based on predefined thresholds and eventing mechanisms for predefined triggers. Under the hood, it uses Kubernetes to manage the container environment and Istio as a service mesh for routing requests and advanced load-balancing for scaling.

Flexibility and No Vendor Lock-in: Knative allows you to build applications on premises, in the cloud, or in a third-party data center. Since it is cloud-agnostic, you have more flexibility because you aren’t locked into a particular cloud provider’s proprietary serverless offerings and their idiosyncratic configurations. You can use different FaaS platforms and Operating Systems as well.

Knative at your Service

How do you get up and running with Knative? In theory, you can set up the Knative plug-in on your own without a managed service. One of the advantages of this approach is more freedom in your design and deployment. The downside is the need to manage the containerized infrastructure on your own. As a DevClass blog put it “Knative isn’t aimed at end-users, but should serve as infrastructure for businesses to build end-user products on top of.”

Knative isn’t the first Kubernetes-based serverless attempt. The increased interest in public cloud serverless offerings (e.g., AWS Lambda, Azure and Google Functions) as well as the maturity and popularity of Kubernetes in containerized environments has led to a number of open source synergy attempts.

Fission is a framework for serverless functions on Kubernetes with the promise of “no containers to build or Docker registries to manage”. Its architecture is based on a “Fission” Router, which is the centerpiece of the framework connecting events and webhooks to execute functions. Its development is led by Platform9.

Kubeless is a Kubernetes-native serverless framework that frees the users from worrying about the underlying infrastructure plumbing. It leverages Kubernetes resources to provide auto-scaling, API routing, monitoring, and troubleshooting. Kubeless uses a Custom Resource Definition to create functions such as custom Kubernetes resources with an in-cluster controller that watches them and launches runtimes on demand. The controller dynamically injects the functions’ code into the runtimes and makes them available over HTTP or via a PubSub mechanism. The project is led by Bitnami.

In comparison to Fission and Kubeless, Knative has a faster adoption rate and greater acceptance potential. This is not just because the timing of its release was better (due to serverless adoption), but also because of its usage of popular Open Source components (Kubernetes and Istio) that are already widely deployed in containerized environments.

To those already familiar with the concepts of container security, Knative introduces some new challenges. The automated Build process can bypass security controls that were implemented at the Registry level, since it creates a parallel deployment mechanism that should also be vetted.

The Serving method can scale nodes up or down depending on the need, which again, could bypass existing deployment templates such as Kubernetes DaemonSets or Helm Charts. Consequently, if you’re used to having all nodes running or monitoring security sidecar containers (such as the Aqua Enforcer), or even a service mesh sidecar such as Envoy, the “served” nodes may not have them running. The new nodes might become invisible from a monitoring and security standpoint.

Watch this webinar to learn more about how MicroEnforcer protects serverless deployments
From Containers to Serverless: Keys to Securing Cloud-Native Workloads

Knative is a new framework with significant potential to disrupt the serverless market by offering an on-premises option to deploy event-based applications with automatic scaling. It's too early in the game to predict if Knative will be a game changer in the serverless arena. Trends on GitHub do not indicate runaway growth, at least not yet. However, given its significant backing from the big boys, it will be interesting to monitor its progress and see if it delivers in the long run.