Apache Commons Text is a library focused on algorithms working on strings. On October 13, 2022, a new vulnerability, CVE-2022-42889, was published, which can lead to remote code execution (RCE).

Alvaro Muñoz, a security researcher who initially reported this vulnerability, found that the library’s (or specifically the StringSubstitutor class) default interpolators may lead to unsafe script evaluation and can result in code execution when processing malicious input. In short, using the library with its default configurations together with the right malicious input can lead to unwanted malicious code execution.

Further details were provided in the Apache mailing lists:

“Apache Commons Text performs variable interpolation, allowing properties to be dynamically evaluated and expanded. The standard format for interpolation is “${prefix:name}”, where “prefix” is used to locate an instance of org.apache.commons.text.lookup.StringLookup that performs the interpolation. Starting with version 1.5 and continuing through 1.9, the set of default Lookup instances included interpolators that could result in arbitrary code execution or contact with remote servers. These lookups are: – “script” – execute expressions using the JVM script execution engine (javax.script) – “dns” – resolve dns records – “url” – load values from urls, including from remote servers Applications using the interpolation defaults in the affected versions may be vulnerable to remote code execution or unintentional contact with remote servers if untrusted configuration values are used.”

Below is a snippet that appeared in Muñoz’s report:

According to NIST, this vulnerability affects Apache Commons Text versions 1.5 through 1.9.

Thus far, this vulnerability strongly resembles Log4Shell, a critical vulnerability that got a lot of attention after a proof of concept (PoC) was released in the wild in December 2021. Both vulnerabilities are in open source projects that are broadly used by different applications. Some media are calling CVE-2022-42889 a “new Log4Shell vulnerability”, saying that it’s even more dangerous than the previous one.

If you’re using any vulnerable version of Apache Commons Text (1.5-19), upgrade the library to the patched version (1.10) as soon as possible.

To detect this vulnerability in your environment, you can connect your repository to the Aqua Cloud Native Security Platform, which automatically maps your dependencies and identifies all vulnerable dependencies your projects use. 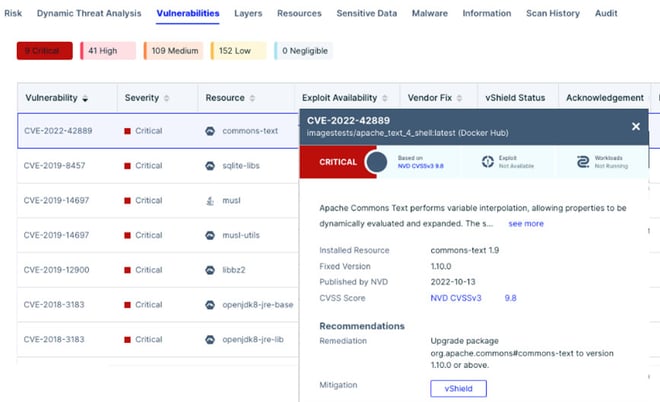 This blog was Co-authored by Assaf Morag
Assaf is a Lead Data Analyst at Aqua Nautilus research team, he focuses on supporting the data needs of the team, obtaining threat intelligence and helping Aqua and the industry stay on the forefront of new threats and methodologies for protection. His work has been published in leading info security publications and journals across the globe, and most recently he contributed to the new MITRE ATT&CK Container Framework.

Guy is a software engineer at Aqua. At work, he focuses on solving problems for the software supply chain group. Prior to Aqua, he was the first developer to join Argon Security, which was later acquired by Aqua. In his spare time, Guy enjoys doing CrossFit, diving, and exploring nature.