Gartner defines CWPP as a combination of scanning and runtime protection for cloud workloads.

Aqua’s CWPP capabilities involve a robust set of runtime controls for layered VM, container, and serverless workload protection. These controls act as layers for a defense-in-depth strategy to harden workloads before they are run, and then to respond quickly and in real time to attacks in progress in the production environment.

Some runtime controls act as an acceptance gate for a workload, defining what can and can’t run. Micro-segmentation policies determine acceptable traffic between nodes, clusters, and hosts, while Kubernetes assurance policies dictate the Kubernetes configurations that must be present (or that cannot be present) for a workload to be allowed to run.

Other runtime controls respond in real time to stop attacks in progress. For example, drift prevention maintains the immutability of containers in runtime; any behavior that was not intended as part of the behavior of a container in runtime will be prevented. Drift prevention takes advantage of the immutable properties of containers to stop the bad behavior without the necessity of knowing what’s causing it. Another example of a real-time response is vShield, which will prevent the ability to exploit any vulnerabilities that cannot be fixed.

It’s important to note that any CWPP—but especially those that protect container, Kubernetes, and serverless workloads—should provide protection while maintaining uptime and minimizing disruption in production.

Teams that can respond in real time to attacks in progress, mitigate exploits, and set preventative hardening controls in runtime are doing well by their overall security posture. Detection brings in another layer of key information that can be used in a feedback loop along with these other controls to make them more effective as part of a larger goal around risk management.

The five functions of NIST, which are the highest level of abstraction for NIST guidelines, put detection squarely between hardening and response capabilities.

To summarize, the protect function generally refers to hardening capabilities that would contain the impact of a potential incident. In a cloud native environment, this would include the shift-left capabilities of a CWPP solution, as well as some of the preventative, hardening runtime policies. 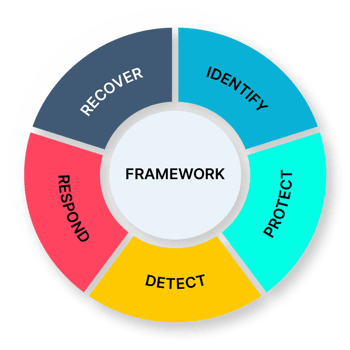 The respond function refers to active mitigation. A cloud native security equivalent would be a feature like drift prevention, which can control the behavior of the container without having to know exactly why the container is behaving badly.

The detect function involves rapid identification of security events and their impact, and is important in cloud native security for the same reasons it might be important in another environment: 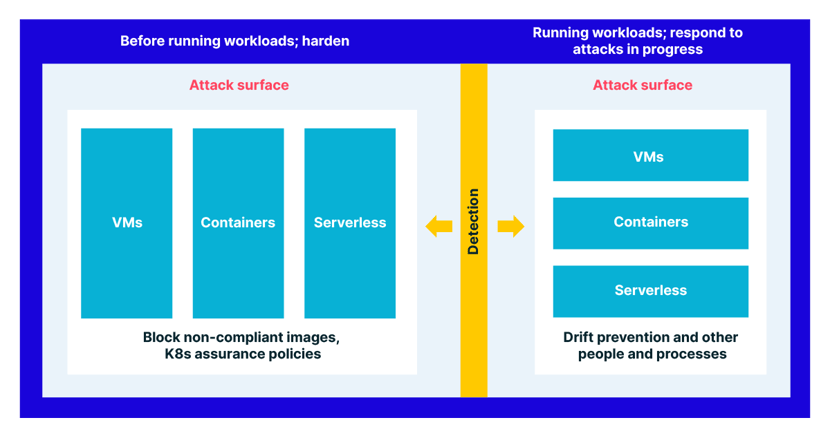 What should detection and response look like in a cloud native environment?

Detection and response must take into account the specifics of a cloud native environment:

CNDR uses eBPF technology to achieve workload coverage and minimal disruption. eBPF is a lightweight option to run programs on the Linux kernel. (For more information, see A Deep Dive into eBPF.) It provides a way to run programs on the kernel with less risk of the kernel crashing, compared with the legacy technique of kernel modules. On its own, eBPF is a way to accomplish any number of ends; for example, it is also being used across the board for networking and monitoring capabilities in cloud native environments.

Aqua Tracee is an open source eBPF-based threat detection engine that can identify more than 300 syscalls from the Linux kernel, along with other key events. CNDR is built on Tracee and uses eBPF to gain workload visibility with minimal disruption.

To discover unknown attacks that target cloud environments, CNDR uses behavioral indicators based on intel from Aqua’s cyber research team, Nautilus. These findings are based on intel from attacks in the wild on cloud native environments, including Linux, containers, serverless, and Kubernetes workloads—for example, a rootkit tactic that involves loading a malicious kernel, execution of fileless malware, or reverse shell. This screenshot shows a behavioral indicator of fileless execution. 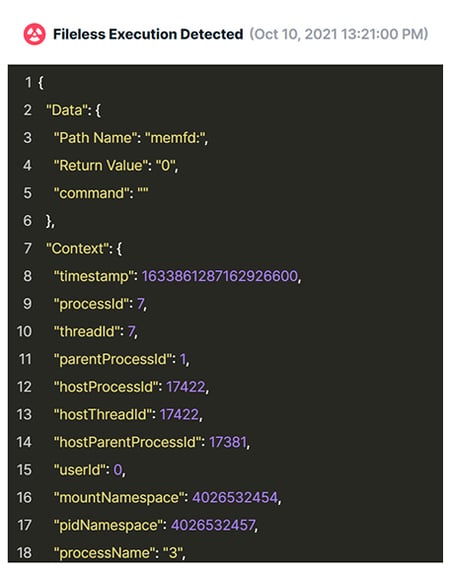 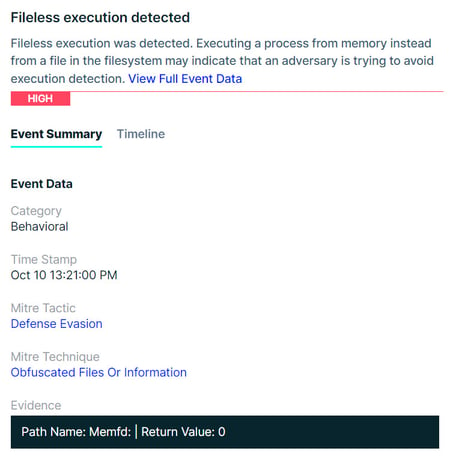 This is the incident screen that displays the details from both the known and unknown attacks.

There is no point in detection without response, or without the ability to set more effective preventative controls. Above, fileless execution was detected as a behavioral indicator by CNDR. Below, we see a preventative runtime policy that can be set specifically to block fileless execution within the container identified by CNDR. This policy can be changed and take effect in real time, without disruption to the workload. CNDR is the only solution in the industry that, combined with Aqua’s other runtime controls, can both detect and respond with minimal disruption in production.

Talk to Aqua Sales today to try CNDR and see what threats are actively progressing in your environment.

Or get Tracee up and running in your Kubernetes cluster to get an easy view into the common container escapes in your environment.