Announcing General Availability of CloudSploit by Aqua for GCP

Aqua Security announced the general availability of CloudSploit by Aqua for Google Cloud Platform (GCP). This release comes after an extended beta program, during which we worked closely with our customers to develop and deliver a robust set of out-of-the-box policies for GCP. This release also includes a Center for Internet Security (CIS) benchmark certification for GCP.

The GCP support is available in the CloudSploit by Aqua cloud service and builds upon the open source project.

Major features included in CloudSploit by Aqua for GCP:

Coverage for All Regions and Zones

The scan reports include recommended remediation information and links to official Google documentation.

CloudSploit by Aqua’s library of GCP plug-ins are also mapped to the popular CIS Benchmark controls. By mapping the policies to the CIS benchmark controls, CloudSploit can evaluate the security posture of your cloud accounts according to the best practices defined by the CIS organization. CloudSploit is CIS certified according to the CIS Google Cloud Platform Foundation Benchmark version 1.0.0 for both Level 1 and Level 2.
For more information about the CIS Benchmark certification, visit cloudsploit.com/cis.

Get started with CloudSploit by Aqua today! 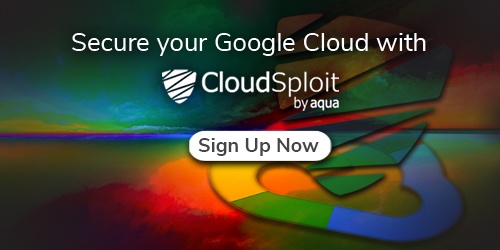 Sign up and connect a GCP account to CloudSploit using our onboarding wizard. CloudSploit only requires access to your configuration metadata and does not access sensitive content in your cloud accounts. CloudSploit continuously audits your account in the background, working to detect potential misconfigurations and other risks that can lead to compromised infrastructure and loss of application and user data.

Matthew Fuller is an accomplished founder and entrepreneur in the cloud security space. Before founding CloudSploit he managed teams of infrastructure engineers in cloud development. That's when he recognized the difficulties in developing truly secure workloads in complex cloud environments, that led him to develop a cloud configuration monitoring service, CloudSploit. As part of Aqua Security, Matthew now oversees Aqua's expansion to SaaS-based cloud security monitoring. Residing in New York City, Matt enjoys interacting with the ever-growing security and startup scene and connecting with like-minded entrepreneurs.