We recently came across a real-life scenario that is very common for organizations. A developer with admin access launched a cloud native application but made a mistake and misconfigured it with weak credentials. Just 12 hours later, the environment was attacked by the DreamBus botnet, which proceeded to evade defenses and run Kinsing malware and cryptominers. Aqua’s Cloud Native Detection and Response (CNDR) alerted to the attack in real time. In this post, we describe how the environment was set up, how the attacker gained access, and how Aqua’s CNDR was used to detect, investigate, and respond to the attack at cloud speed.

Setting up the environment

To better understand how and why the attack happened, it’s necessary to reconstruct the steps the developer took before running the containers.

Next, the developer scanned the container images with Aqua’s Dynamic Threat Analysis (DTA). DTA is designed to run container images in a safe isolated environment — a sandbox — to better understand the container behavior once they are running. While static scanners find known vulnerabilities and malicious files based on signatures and hashes, DTA detects malicious behavior that only manifests itself in runtime and, therefore, can’t be found otherwise.

For example, if a container image is clean but one of the commands instructs to drop and execute a payload from a remote C2 server, the static scanner won’t pick that up. The same goes for fileless malware and packed or obfuscated files. Another advantage is that, unlike static scanners, DTA can also detect malicious network traffic. As a result, DTA provides more comprehensive threat output on a given container image. In our case, DTA didn’t detect any issues — the container images were clean of malware.

The developer deployed Aqua’s workload protection and CNDR but disabled drift prevention, a solution that deterministically prohibits any changes to the image after it is instantiated into a container. Also, the database container allowed access from any IP address (0.0.0.0:5432), and no micro-segmentation policies were created to limit access to the containers or the database. In addition, the PostgreSQL database was configured with weak credentials.

Detecting the Botnet attack with CNDR

Aqua’s CNDR is a recently introduced cloud native detection and response capability that uses behavioral indicators created from observations of attacks in the wild to detect and stop unknown attacks in real time.

Within 12 hours of creating the environment, CNDR alerted to a severe security issue in one of the containers. The developer stopped the container and started investigating the reasons.

CNDR raised a total of 25 alerts with different issues related to the container and the underlying host. In the CNDR dashboard, incident and response teams could easily find information and context related to each event, its origin (for instance, host or container), its description and severity, which saved a lot of time.

Clicking “View Full Event Data” provides details about each event. In this case, the attacker executed in the container the Kinsing malware from /tmp. 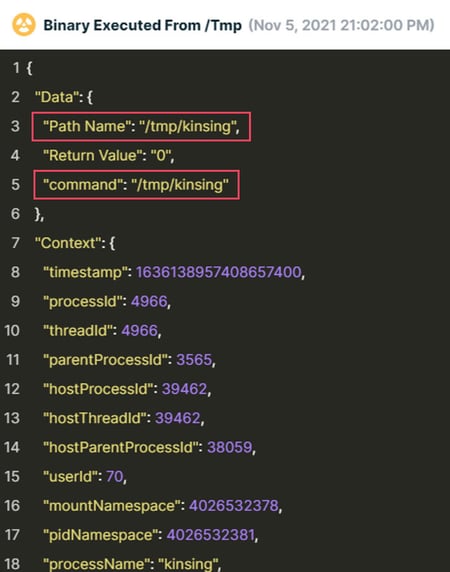 Further evidence can be collected via CNDR’s audit screen. CNDR detected the use of wget and curl to download files from a remote source. That means that during runtime, the container downloaded the application curl, which enabled the attacker to download more files from the remote source. 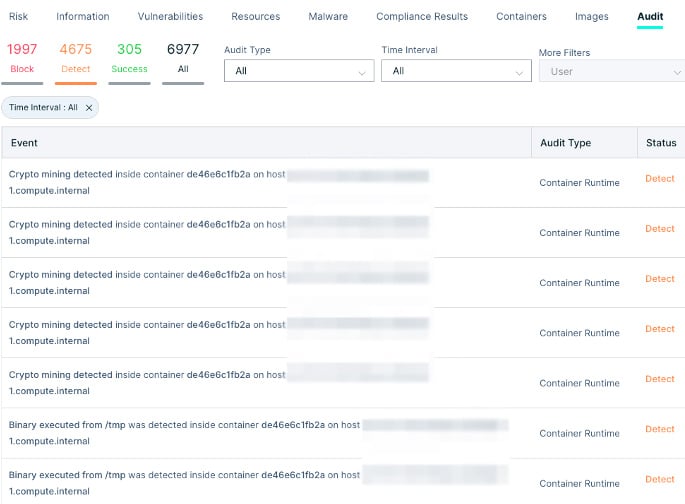 CNDR’s audit logs recorded almost 7,000 events providing a full picture of the attack. They include detections of suspicious and malicious behavior and blocking of network communications, such as:

In addition, several malicious files were found in the container:

While analyzing the PostgreSQL logs might have revealed foul play to gain initial access, these logs were missing, along with others. Deleting system logs is a common tactic of the Kinsing attackers.

One of the alerts in the CNDR’s incident screen implies that the attacker compromised system integrity by deleting system logs, which may explain the missing log files. It also raises the question of whether the attacker dumped the database content and exfiltrated it outside of the environment.

Since Postgres version 9.3, a feature known as ‘COPY TO/FROM PROGRAM’ allows the database superuser and users in the ‘pg_execute_server_program’ group to run arbitrary OS commands. This feature can be exploited after authentication or via exploiting an SQL injection in an application with PostgreSQL running in the background. Worth noting that this feature is not considered a vulnerability by the vendor.

This attack is a great example of the defense-in-depth strategy in action. None of the initial layers of protection deployed in the environment, including workload protection and security scanning, were able to prevent or detect the attack.

If not for CNDR, the attackers would have succeeded and remained hidden, mining cryptocurrency and potentially causing more damage. CNDR detected the attack in real time, raising alerts about malicious activity and providing additional logs for further investigation.

An attack like this illustrates the value of the defense-in-depth approach — building multiple layers of security and deploying redundant defenses that address a variety of attack vectors. In case one security control fails, other layers can prevent or stop the attack.

Aqua’s runtime protection approach deploys a series of security mechanisms and controls that are layered throughout your cloud native environment to protect the confidentiality, integrity, and availability of the network, workloads, and data.

Aqua’s advanced malware protection continuously scans the environment for known threats and malware based on signatures and hashes. In this attack, Aqua’s malware protection detected the malicious script (.systemd-service.sh), the Kinsing malware, the Kdevtmpfsi cryptominer, and other malicious items.

We also highly recommend using a tool to ensure that your passwords are strong and production-compatible. For instance, Avishai Wool and Liron David’s project provides estimations of passwords’ strength to help users avoid picking weak passwords by predicting how many attempts a password cracker would need until it finds a given password.

During the investigation, we scanned our container images with Aqua’s solutions: a static scanner and DTA. The exploited vulnerability in our case was under dispute and thus was overlooked. In production environments, therefore, we highly recommend deploying detection and response solutions such as CNDR that can reveal malicious behavior during runtime. They also help detect and prevent zero-day attacks that can happen in production.

Aqua’s cloud workload protection platform capabilities involve a robust set of runtime controls for layered VM, container, and serverless workload protection. These controls act as layers for a defense-in-depth strategy to harden workloads before they are run and then to respond in real time to attacks in progress in the production environment. Some runtime controls such as assurance policies act as an acceptance gate for workloads, defining what can and can’t run.

Micro-segmentation policies determine acceptable traffic between nodes, clusters, and hosts, while Kubernetes assurance policies dictate the Kubernetes configurations that must be present (or that cannot be present) for a workload to be allowed to run. The end-user has full control over the workload protection capabilities and can configure them in advance to protect the environment. 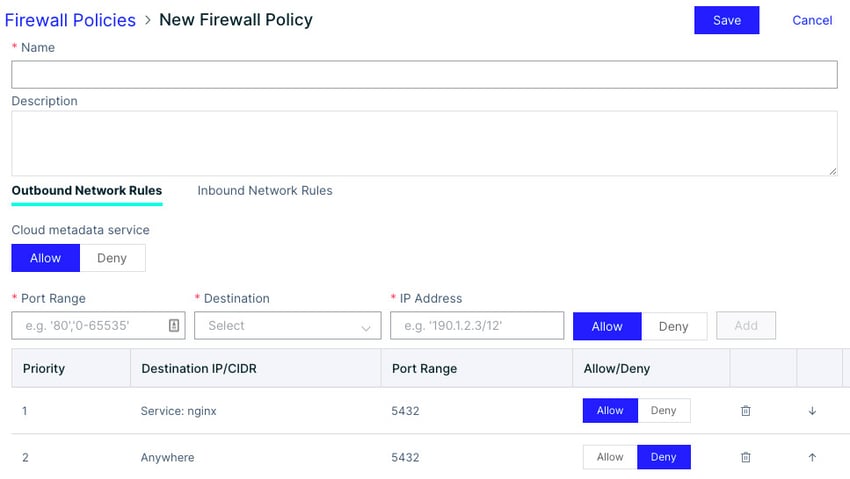 We highly advise that you don’t expose to the Internet services that can be kept private, such as a PostgreSQL database. However, there are legitimate use cases when databases need to be publicly accessible. If this is the case, consider using a network firewall and limiting access to your database. Instead of allowing inbound traffic to everyone, limit the traffic to specific IPs or containers.

To maintain the immutability of containers in runtime, drift prevention deterministically prohibits any changes to the image after it is instantiated into a container. This capability takes advantage of the immutable properties of containers to identify and block anomalous behavior in running containers without the necessity of knowing what’s causing it.