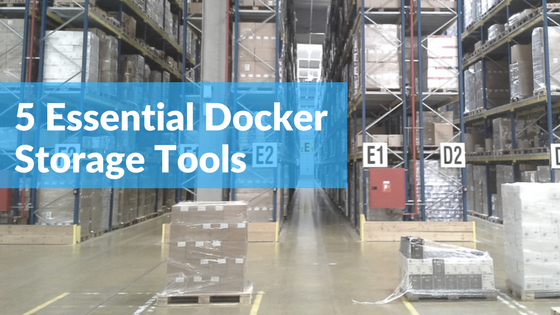 Storage has been a hot topic for as long as containers have been around. According to a survey by Portworx, 26% of IT pros cite persistent storage as the most difficult challenge in adopting containers, and 44% blame inadequate tools as the main reason. Although containers are stateless by design, the need to store data beyond a container's lifespan has led to the creation of dozens of tools and plugins. However, these tools have to fit a complex set of requirements, including:

In this post, we'll present 5 popular container storage solutions and their approach to these issues.

Portworx provides persistent storage for containers by managing object, block, and file storage across a cluster, and it’s managed entirely using containers. Each host runs a Portworx container that adds the host's storage resources to the Portworx cluster. The cluster then creates a global resource pool, which you can partition into smaller volumes for use in your containers. As containers write to these volumes, Portworx continuously replicates the data across the cluster. Because Portworx is entirely container-driven, you can deploy, configure, and scale Portworx using Docker, Kubernetes, Rancher, or other tools.

For many organizations, container security is the primary barrier to adopting Docker. While many platforms provide basic security tools such as volume encryption, BlockBridge emphasizes it from the start. BlockBridge natively supports features such as multi-factor authentication, one-time passwords (OTPs), end-to-end encryption, and secure erasure. This ensures that even shared volumes can't be accessed, attached to, recovered, or even discovered on the host without proper authentication.

BlockBridge is a commercial product and comes with a limited trial.

Despite the name, StorageOS isn't an OS but an elastic storage platform. Like Portworx, StorageOS pools resources from hosts running either a StorageOS container or Docker plugin. You can format these volumes using a standard filesystem such as ext4 and access them using any container. StorageOS also supports caching to memory, end-to-end compression, QoS, and real-time replication.

StorageOS is available with a free limited license or a paid enterprise license.

Many of the storage solutions in this list use their own internal storage backends, or only allow you to connect to one backend at a time. REX-Ray, on the other hand, combines multiple storage backends under a single interface. A host running the REX-Ray service presents these as standard data volumes, allowing containers to leverage them without knowing the underlying backend. REX-Ray integrates with storage providers such as Ceph, AWS, and even VirtualBox.

REX-Ray is also the first solution to support the Container Storage Interface (CSI) specification, a universal standard that would allow orchestration tools to share storage plugins. If other plugins adopt the CSI standard, it will simplify the ability to both create and use storage plugins for use in different environments. In the meantime, REX-Ray provides plugins for Docker, Kubernetes, Mesos, and any orchestration tools.

REX-Ray is an open source project maintained by the {code} team.

Founded by Cisco UCS veterans, Diamanti takes a different approach to container storage by packaging it as a hardware appliance. It is a hyperconverged container platform with storage, networking, compute, Docker, and Kubernetes built in.

Their solution comes in the form of a PCIe server card containing networking and storage controllers. These controllers create virtualized networking and storage management systems that are meant to handle any container I/O operations. Because of this, Diamanti works on bare metal container environments and at the moment, supports Kubernetes. When multiple cards are deployed in the same cluster, they create a distributed traffic management system that monitors traffic between hosts and provides insight into the health of your container network.

While there are established products in the market, container storage is still a maturing field. 2018 may see greater adoption of the CSI standard, which promises to improve container storage between orchestration programs. With nearly 70% of organizations planning to invest in container technology, we'll likely see several changes in the container orchestration and storage landscape over the next year.